Rodeos in Queensland
Queensland could well be described as the rodeo state of Australia, because of the huge numbers of rodeos that are held each year in rural and regional communities, as well as larger towns and cities. However, that’s a sad claim to fame because, quite simply, rodeos are events that celebrate exploitation and human domination over animals.  To those who say rodeos are a tradition and an essential part of Queensland identity, we say it’s time to buck this tradition and rethink rodeos.

Bans on rodeos
Britain, the very same nation that colonised Queensland, banned rodeos way back in 1934 because of animal cruelty concerns. Rodeos are also banned in The Netherlands, other parts of Europe and the United States, as well as the ACT in Australia. There is a growing body of evidence that rodeos are exploitative in many ways and place animals at risk of injury and death. As rodeos are a mere entertainment, Animal Liberation Qld believes that the suffering of any rodeo animal cannot be justified and that it is time for many Queensland towns to work towards more animal-friendly community events. 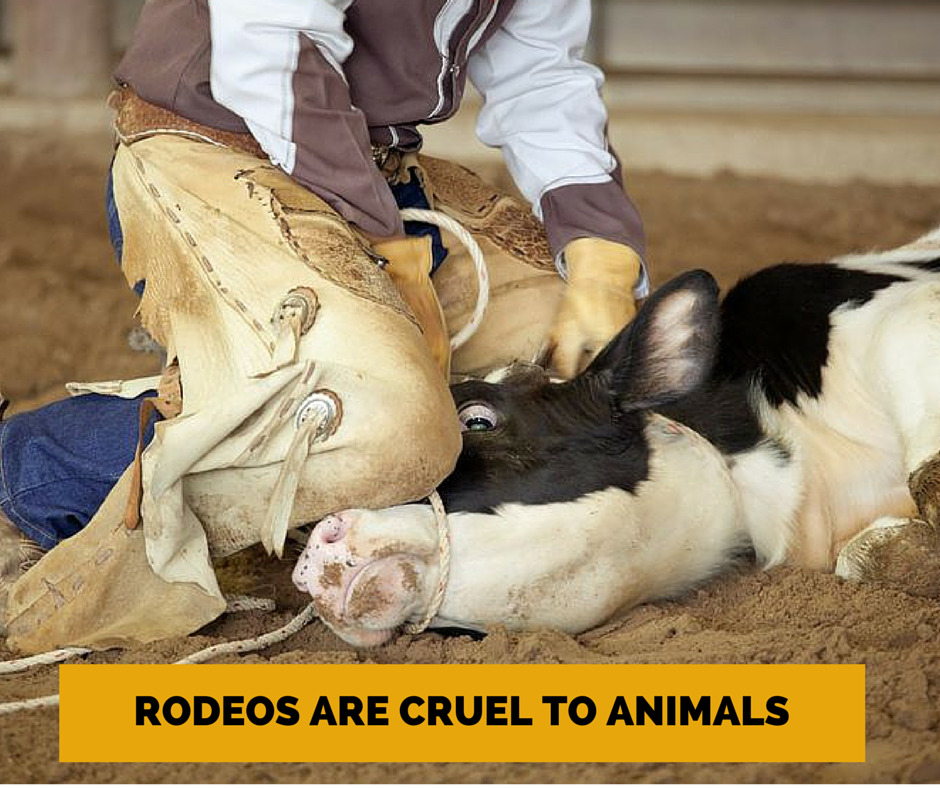 What happens at a rodeo?
During rodeos, human performers make a show of dominating animals that are routinely provoked and stressed to encourage ‘flight or fight’ behaviour. These responses are deemed more entertaining and exciting for the audience than the quiet, slow-moving behaviour of calm, relaxed animals.  Instruments used during Queensland rodeo events may include electric prods, spurs, flank straps, and ropes. In the past, deliberate twisting of tails to hurt and anger the animals was a common tactic. The industry denies this practice still occurs, but as rodeo animal handlers are routinely shielded from unobstructed public view by other rodeo workers, suspicions remain – especially when previously settled animals nearly always bolt into the arena.

If the needs of animals are considered first and foremost, then rodeo performances should be seen not as acts of daring or courage, but as contrived displays of human domination over animals. The animals are routinely subjected to disrespect, indignities and fear; at worst they experience injuries and death.

This video showing a calf roping event at Dayboro Rodeo in south-east Queensland clearly shows how a rodeo event packaged as an entertainment is more accurately described as animal exploitation.

Video filmed by Animal Liberation Qld in May 2013 at Dayboro Rodeo.

Transport and confinement stresses
Like circus animals, rodeo animals have to be transported long distances in trucks when moving from one event to the next. They spend large portions of their lives confined like this, and given Queensland’s hot weather, often experience discomfort and thirst.
Upon arrival at the rodeo grounds, the animals remain confined, usually in small pens. This inability to free-range is a totally unnatural experience for these grazing animals. Furthermore, shelter from the sun is usually not available. All up, they lead a pretty miserable existence, despite rodeo proponents saying that these ‘lucky’ animals lead much longer lives than food animals. If we’re talking quality of life over quantity, we think that label of lucky is certainly debatable.

Typical events at a Queensland rodeo

A summary of each main event is provided in our rodeo brochure (PDF - 439 kb).

What can you do?