Boe's story and the Wacol pigs

In January (2019) we received footage from investigators that showed extremely upsetting footage of boars (uncastrated male pigs) at a semen collection facility at Wacol, Brisbane. It was heartbreaking to see these pigs suffer. In particular, one boar who we named Boe, whose condition deteriorated over the course of the week-long investigation until he finally died and was left outside the facility to rot. 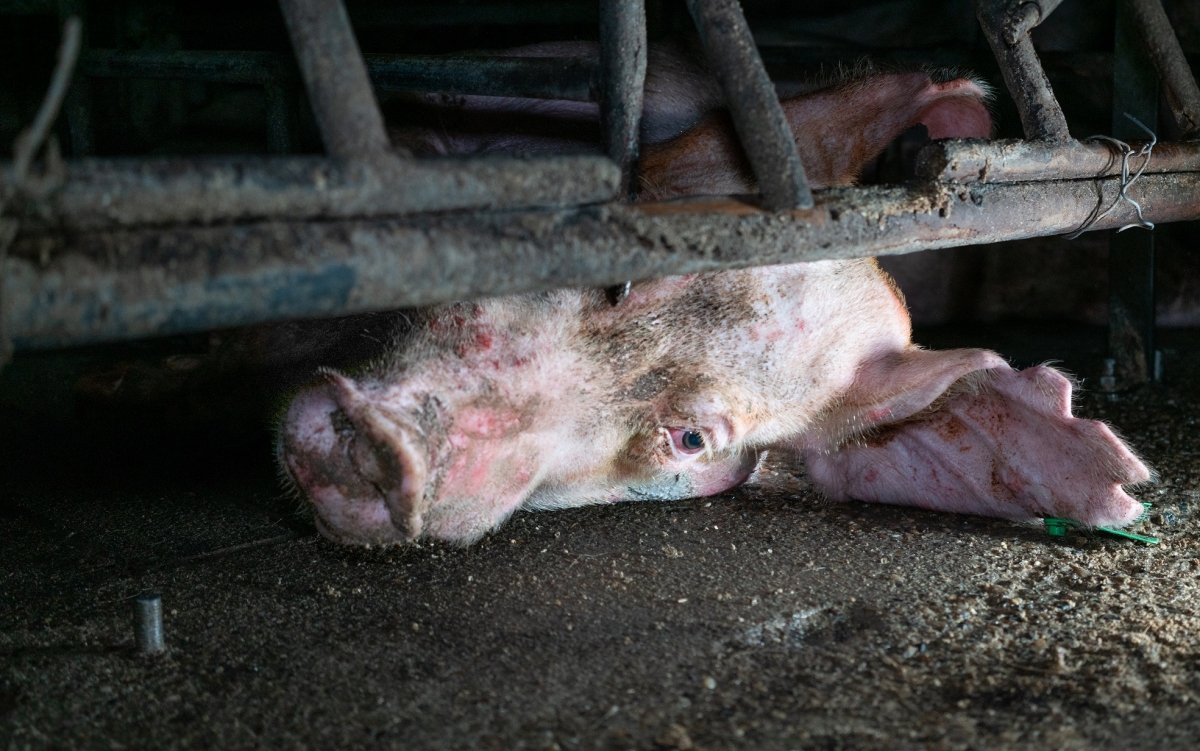 Above: The boar we named Boe who was left to die by workers.

Semen collection farms are a relatively unknown facet of the industry. At this facility, at least 20 boars are kept in tiny stalls - most are equivalent to sow stalls - with no room to turn around, and barely enough room to even lie down. They have no enrichment, they are left with untreated injuries, fed only the minimum food required to keep them alive and “useful”, and are routinely abused. The only time the boars leave their tiny, filthy stall is for semen collection.

When we received the footage our immediate concern was around the strong possibility of another boar suffering a similar fate to Boe from untreated illness and dying a slow painful death. We immediately informed the authorities with a complaint to RSPCA Qld and passed on the video footage. RSPCA Qld acted quickly and arranged a team of inspectors and vets from both RSPCA Qld and Biosecurity Qld to conduct a surprise inspection.

We understand at least one boar was euthanised that day. After that, the rest of the investigation was handed over to Biosecurity Qld. In Queensland, a Memorandum of Understanding exists in which all farmed animal issues are referred to Biosecurity Qld, which is part of the Queensland Department of Agriculture.

On receiving no further updates from Biosecurity Qld, and realising authorities were not taking this seriously, we released the footage through two videos.

On 11 March we released the second video documenting further abuse and filthy conditions. Faeces and infestations were found throughout the facility. Video footage shows the worker kicking the boars, stomping and smashing metal bars against a boar’s head. 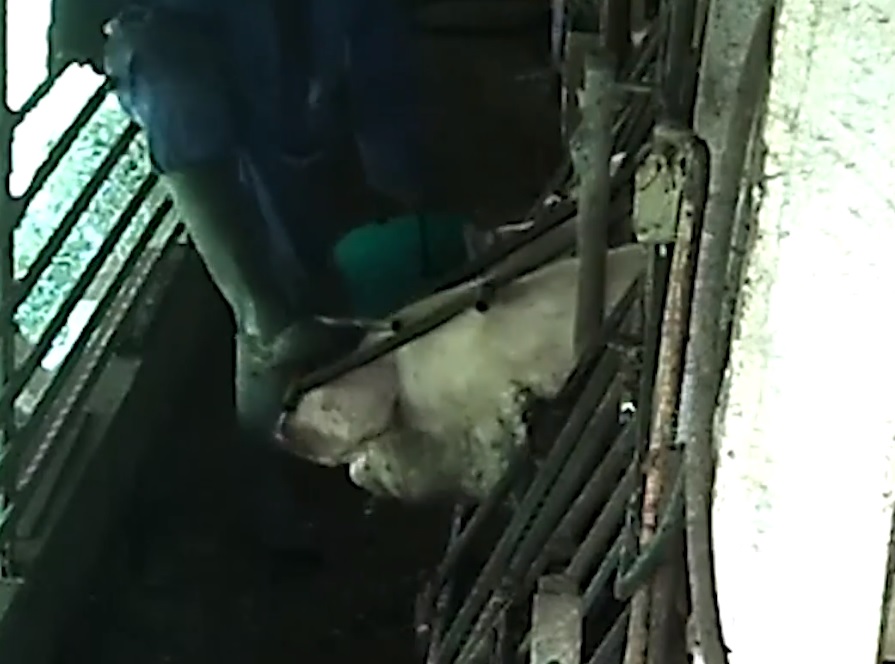 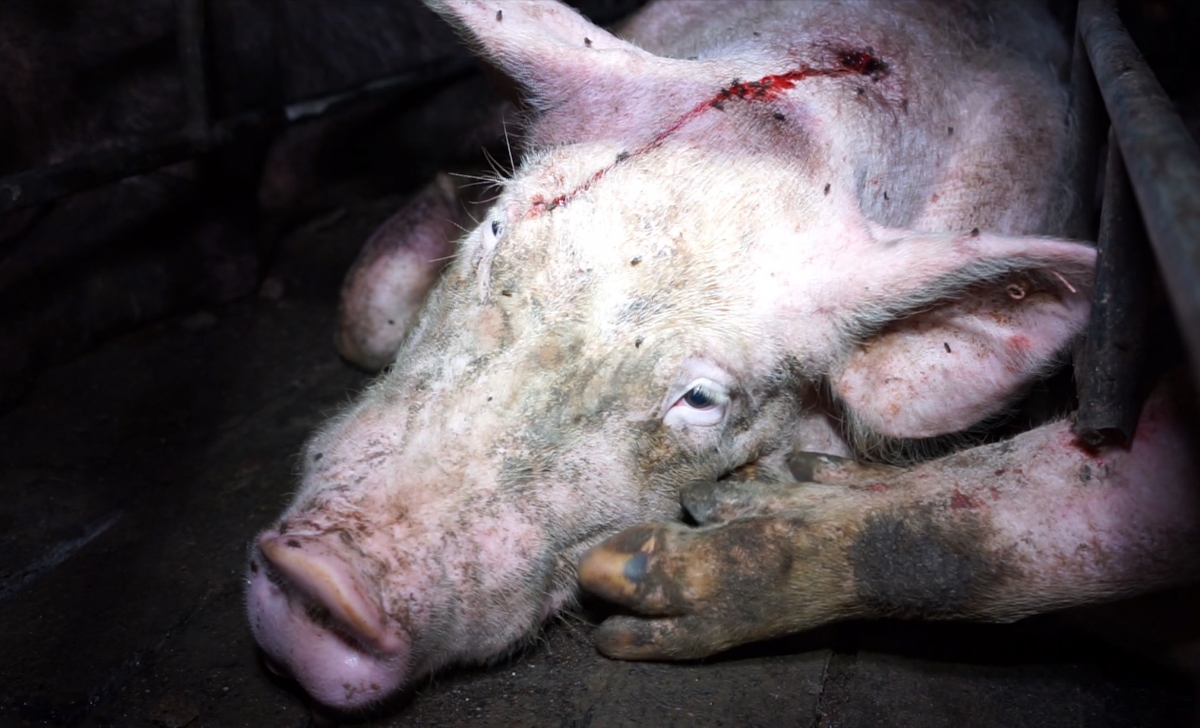 Above: Injuries were left untreated.

After numerous follow-ups with the Department, we learned that several “direction orders” were given to the owner to rectify issues they had found in their inspection. Biosecurity Queensland has confirmed that they have been back multiple times since the initial inspection and they are satisfied that all direction orders are being adhered to. In other words, it seems they will not be taking further action and have given this place the tick of approval.
In practice, very little has changed for the boars that may spend the rest of their lives in these barren rusty metal cells. From the information we have, the direction orders related to the untreated wounds, and the maintenance or uncleanliness of the facility. There is nothing that will give any sense of relief to these boars and nothing that will stop others from meeting a similar fate to Boe.

Despite numerous requests for further information authorities would “not comment on the outcome of any investigations”. We can, unfortunately, conclude that no charges have been laid - despite numerous animal cruelty abuses outlined above that were documented by investigators, as well as issues during the inspection by authorities. If these boars were dogs, the owner and workers would now be facing court.

More than 3000 people sent emails of concern to the Minister for Agriculture. A couple of weeks later his office sent out a generic reply showing very little concern: 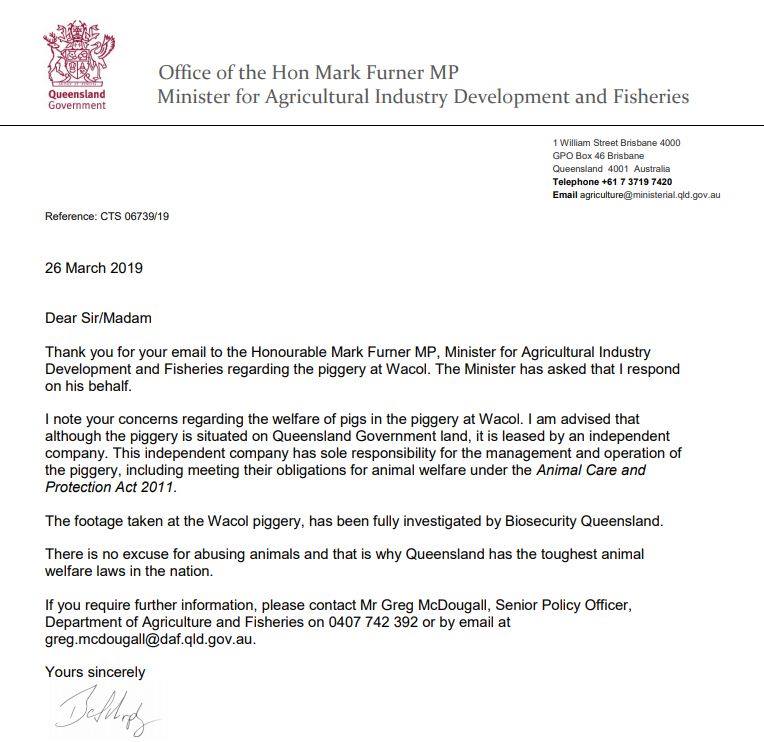 Above: Minister's office response to public concerns regarding lack of action taken by the Department.

We have also raised several conflicts of interests. Firstly, the land on which the Wacol pigs are incarcerated is leased from the Department of Agriculture - the very Department that is responsible for upholding animal welfare laws - is also taking money from this facility. The Minister failed to see any conflict here.

Secondly, this issue reminds us of the conflict of interest that exists for all animal agriculture. The Department of Agriculture in each state is responsible for growth and economic sustainability of the industry, but at the same time has the responsibility to enforce the Animal Care and Protection Act - and to police the very businesses it seeks to promote and grow. Both the Premier and Minister continue to ignore this very clear conflict of interest.

We are grateful to the investigators who took great risks to bring this cruelty to light. This is a thankless task, being confronted first hand with this cruelty. We greatly appreciate the thousands of you who complained to the Minister, made phone calls, and shared the video footage.

Sadly, this is the reality of millions of animals used and abused around the country every day. It is no wonder we see cruelty like this when the system is set up to fail these animals. As long as we have a society that supports, embraces and even celebrates animal agriculture, scenes like this will continue to be commonplace.

Know that this hasn’t all been for nothing. Hundreds of thousands of people have had their eyes opened to the reality of animal agriculture. For countless people, this was the final straw, and they have committed to going vegan. For others, this may be the start of their journey.

We can all help through our daily choices. By choosing vegan alternatives and never buying meat, dairy, eggs and other animal products, we take away the demand. Speak to your friends and family. Keep sharing footage and stories on social media. Keep writing and calling the Ministers, and speak to your local MP. Volunteer with or donate to animal advocacy groups.

Pressure on industry and government is growing every day, and every day the public is becoming more and more informed. Sadly, these industries of cruelty will not close down overnight, but with your help their days are numbered. We will keep fighting, and we will achieve animal liberation.